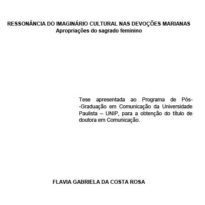 This thesis deals with how, over time, strategically, the re-readings of the sacred feminine in the archetype of the "Great Mother" were devoured by Christianity and re-signified by the Catholic Church in the figure of the Virgin Mary. She wishes not only to reflect on the decoy of the figure of the feminine, relegated for years by the patriarchal religions, but to shed light on the instrumentalization of such a strong archetype to serve a particular religion, fully adhering to the dynamics of the sphere. In order to reflect on the substitution of the primordial myth in three different countries, Guadalupe (Guadalupe, Mexico), Aparecida (São Paulo, Brazil), and Fatima (Leiria, Portugal), using modern communication strategies, we will see that the main motivation for this new identity Imposes itself on the "Great Mother," is to preserve the supremacy of a specific religion by creating a character that serves this dynamic. We will see that, from Crete to Guadalupe, from Ephesus to Aparecida and Fatima, the myth is the same, the difference is the re-reading of the sacred feminine and its transformation into a character, since the temples, which are increasingly full, and Which once were the belly itself, also resigned to meet this new profile of reference. The study of three of the Marian temples with the largest flow of visitors in the world points us to a reality: in the twenty-first century we see the attempt to build a character of media elements, with a strong appeal and that overlaps with the sacred aspect from where it emerges.