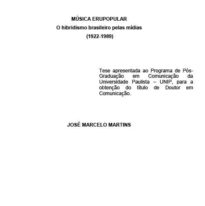 It is common in the Brazilian culture to judge the fact of something that doesn’t belong to our universe, it has to be automatically our oposer; almost like a scheme between “better x worse”, “sky x hell”, “sacred x profane”. Our central themme is to describe about one segment of the popular brazilian music, which had absorbed the influence of classical music and its structure, and distancing it self from conventional popular music, bringing into discussion the concepts of about classical and popular music, questioning the need to create a terminology to designate hybridism within the brazilian music: brazilian erupopular music. We present a hypothesis that some composers don’t fit as popular or erudite, but they transit simultaneously in these two segments of brazilian music. In the corpus of this research, we did a survey inside print media on which were the main newspapers and magazines that approached brazilian music from 1922 to 1989, until the creation of the orchestras and the universities directioned to this musical segment. We chose as methodology to this work the qualitative research. In the bibliographic analysis we seek a reflexive theorical basics through the authors who approach the subject. We did a survey of the conceptual dicussions about folklore, popular, erudite culture, highlighting Jesús Martín-Barbero, Néstor García Canclini, José Miguel Wisnik, and Mário de Andrade, and contexting brazilian music in the twenties, 1920, starting from the Wheek of Modern Art, due to the great concern of the composers in inserting elements of the national culture into their works.