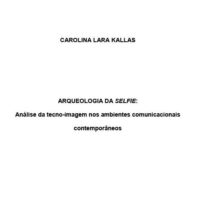 This research aims to analyze the exacerbated production of self-referential images in the contemporary communicational scenario, presented as the selfies phenomenon. We attempt to answer the following question: what is hidden behind this phenomenon, and what the appropriated archaic elements for it are. The objective is to analyze the centrality of the new apparatuses of communication and understand their interference within the culture as regards the construction of links. The hypothesis points to an inversion in the way we relate and build the images in the post-modern society. It is believed that, what remains in the self-referential images is the appearance and not the sense. As well as the supremacy of the technique. The derived hypotheses start from the premise that the unbridled propagation of the images of itself in the present time, registers an absence of presence which brings with it the anesthetization of the body through the exacerbation of the visual sense in the ambience of the exhibition, making the Axis Mundi operative in the cultural construction of postmodernity centered on technological devices. For this purpose, we carry out a prospective method of analysis, selection of news about the phenomenon, classification and analysis of the phenomena in order to relate them to a theoretical framework that is supported by Edgar Morin's Theory of Complexity and the Theory of Image, and seek support in the anthropology of the image developed by Hans Belting. From the theoretical framework, we take the concept of simulacrum developed by Jean Baudrillard, the concept of iconomania by Günter Andres; The study of Christoph Wulf's mimesis, and the theories about the black box and Vilém Flusser's concept of employee. This theoretical framework was chosen to encompass the complexity of Norval Baitello's concept of Iconophagy and its relation to the lack of otherness in post-industrial society.